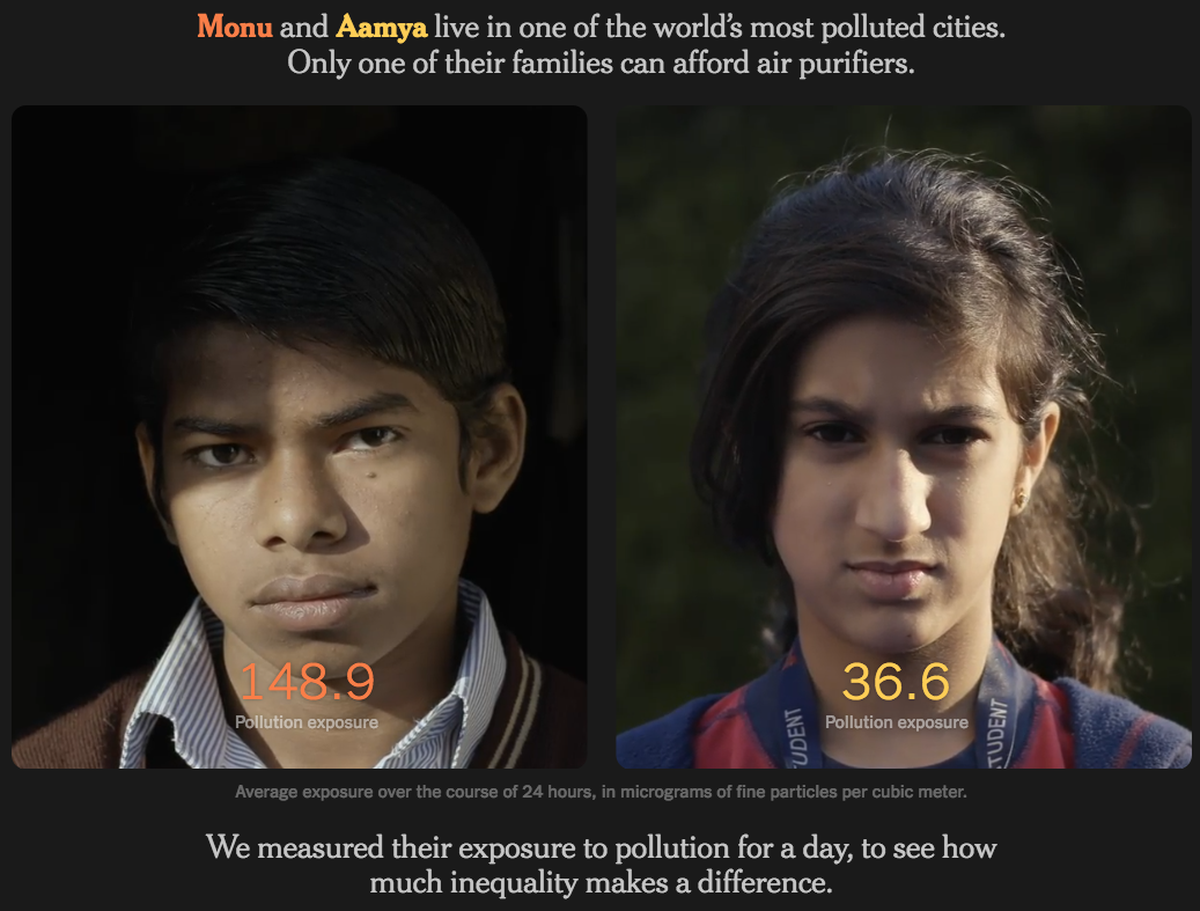 In reporting their story, “Who Gets to Breathe Clean Air in New Delhi?”, The New York Times selected the AirBeam2 as their primary tool for measuring personal exposures to particulate matter air pollution. The data captured by the AirBeam2 is presented as part of an interactive story that follows a day-in-the-life of two young people living in Delhi. 11-year old Aamya’s family is wealthy enough to afford air purifiers for their home, she attends a school that is indoors and has air filters in every classroom, and the family cooks over a propane stove. 13-year old Monu’s family doesn’t have the financial means to purchase an air filter for their home, he attends a school that is open air, and the family cooks over an open fire. By the end of the day, Monu’s exposure to air pollution is four times that of Aamya’s, vividly depicting how disparities in wealth translate into disparities in health. As the times puts it,

“Air pollution killed more Indians last year than any other risk factor, and Delhi is among the most polluted cities in the country. But the burden is unequally shared. Children from poor families in Delhi spend more of their lives outdoors. Their families are more likely to use wood-burning stoves, which create soot. They can’t afford the air filters that have become ubiquitous in middle-class homes. And often, they don’t even think much about air pollution, because they face more pressing threats, like running out of food”.

As an organization dedicated to making technologies accessible so communities facing disproportionate environmental burdens can advocate for equity and improved quality of life, HabitatMap was pleased to have the AirBeam2 employed by the New York Times to document environmental injustice in India. For an inside look at how the Times collected data for this story check out their article “How We Reported on Pollution in New Delhi Through Two Children”. If you’re interested in digging into the Times archive and learning more about HabitatMap and the development of the AirCasting platform and the AirBeam, watch this Times video from 2013.